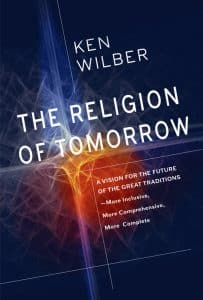 When Buddha got up from the tree…he was asked if he was a God, he replied “No, I am awakened”.

Good news and bad news friends! On one hand, we are lucky and blessed to have a new epic from Ken and on the other…it’s nearly 700 pages (not including the notes!) Ha! Ha! Your sexy summer beach reading has just been hijacked by the greatest thinker since well-you can determine that.

There are four sections:

I will keep this relatively brief as I’ve actually not read much of it yet and I don’t even have a copy of it. Nevertheless, thanks to Jeff Bezos we can read the introduction and much of the conclusion on Amazon. But/and…the 60 or so pages I’ve seen are staggering.

As I see it, the book is a plea. A plea for each of us to assume our responsibility to remake our world by re-thinking our world. “Wider, deeper, higher as evenly observed by our I-I (integral “I”ness)” as Ken writes. “The entire universe is arising within you” and he says that because there are 18 billion hands on the planet, we have more than enough capacity to do what we need to do. Our moral imperative is to transform this world and if “you” can’t do it…then it can’t be done…please read that sentence again.

Ken believes that if religion and spirituality are to survive post-modernity, it’ll need to evolve. The weak signal that we are experiencing across the planet is that fewer and fewer people are finding religion relevant and a staggering 75% of millennials describe themselves as “spiritual but not religious”. Only 11% of Northern Europeans belong or identify with an organized religion/church. Integral Spirituality is the best chance (and most appropriate) the great traditions have in sustaining their relevance but they’ll need to adapt their “exoteric” forms with their “esoteric”- the former is the mythic (Moses parted the Red Sea, Mary was a Virgin, a thousand virgins await a martyr in heaven etc.) and the latter is essentially the common truth the great traditions have discovered-briefly-there is suffering, we are not enlightened, there is a way to be enlightened/everlasting life. Ken frames a lot of the book in the Buddhist context but he says there are an equal number of Christian, Muslim, Hindu examples of “emergent spirituality” my word-so that every faith has an access point.

For people who have followed Ken (and his related practices in some form) there will be a familiarity to this book. I don’t think we are experiencing a Ken V for example, as he’s described his various evolutions from I-IV – but he goes deep literally in the spirit-in-action movement it appears- it’s the only way we can explain the mysteries that lie between evolution and spirituality.

He’s framing the book around a Fourth Turning…which is a bold thing to do. The first three turnings were instigated by Buddha, Nagarjuno and the half-brothers Asanga & Vasubandhu, so Ken is attempting to spark a transformation in Buddhism that hasn’t evolved much in a thousand years. What makes Ken unique is that he’s got the gumption to attempt to turn the wheel one more time-if he doesn’t who has? I will take his map and follow one of the multiple trails he lays out until I discover a divergence and-if I do, I suspect I’ll meet him further on up the road and add another path or three.

And so we end this beautiful book with a call to make both “Waking Up” (discovering your true nature/states of consciousness) and “Growing Up” (the Form of objective reality you experience in its entirety/levels of consciousness) our core inspiration to become who we already are. Ken says, “we/Western culture needs a North Star” which is the “Ultimate Truth” to ascend to our vision of unity with all and everything. Let’s not dive into the shallow end of the pool my friends, let’s jump in deep…deep. You are the religion of tomorrow!