Preparing for a World that Doesn't Exist Yet 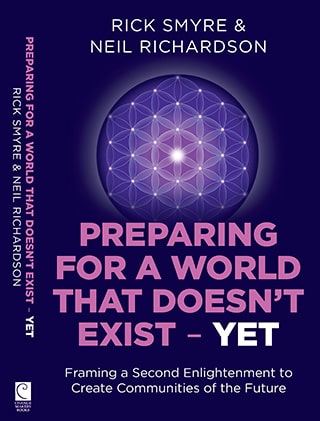 Preparing For A World That Doesn’t Exist – Yet

Neil Richardson, with co-author Rick Smyre, present Preparing For A World That Doesn’t Exist – Yet: Framing a Second Enlightenment to Create Communities of the Future. Released by Change Makers Books in July 2016, the book is for sale on Amazon.

This book offers an approach to preparing for a society that will be increasingly fast-paced, interconnected, interdependent and complex. Preparing For A World That Doesn’t Exist – Yet reveals an emerging Second Enlightenment and describes the capacities needed to achieve success in this new, fast-evolving world.

Higher education, health and wellness, governance, and the economy are transforming in ways few of us could have imagined even five years ago. “Readers of this book will gain skills needed to ride the wave of the future and the perspective to be ready to catch the next wave, too. Planners, physicians, government and higher-education leaders are using the principles and capacities described in this book to create better organizations and better communities of the future that will ensure a planet that can thrive.

Creating Communities of the Future

What People Are Saying

“Futurists and humanists Smyre and Richardson, along with an eclectic team, have taken a totally and totipotential novel approach – futures can be prepared for, change and complexity, as expected and natural, can be abided with tools AND human BESTs, and seamless transformations AND transitions can be better aligned, utilizing their mentoring.” Read more. – Dr. Frank M.

“This is a fascinating and timely book that is sure to change the way you think about democracy. The book takes our democracies forward into something that our founding fathers never dreamed of. To be sure, the author’s words concerning the Second Enlightenment are epochal.” Read more. – Steven H.

“What is underway – according to authors Smyre and Richardson – is a Second Enlightenment. Just as the 18th Century Enlightenment gave the Founders the intellectual and moral framework to create the constitution and governance structures, we now need to draw on recent thinking to forge a political model that will work in the 21st Century – a world that is connected, changing, shifting at an ever-increasing pace.” Read more.– Tim W.

Read full reviews about Preparing for a World That Doesn’t Exist – Yet on Amazon.