The Sound of Wise Silence: A Perspective from Blackrock Summit 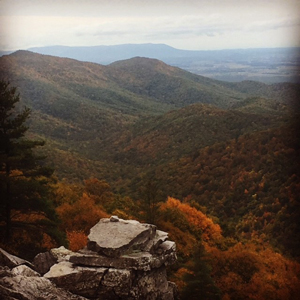 There was a fire burning. Five of us were in the woods hundreds of miles from our home. I was with a high school friend and the rest were strangers hunkered down in a camping hut on the Appalachian Trail expecting intense rain.

Staring into the fire, in a state of trance or hypnotic focus we shared our thoughts and insights about the world including politics and their underlying values, we also talked about sports, music, women and of course hiking treks.

What was remarkable to me were things I seldom encounter anymore.

We sat together for five or six hours talking naturally, really listening to each other, connecting ideas and remarkably letting silence fill the smoky air.

In the wild, one falls into the natural rhythm of the earth. Climbing a mountain moving slowly step by step, up and down rocky trails and intense grades, ascending thousands of feet and descending an equal number; the sound of silence is for me the predominate sense.

Around the flames there was no argument and no one attempted to change another’s perspective; instead, we naturally found a way to connect ideas and experiences into mini narratives. The talk was often about serious things, yet we laughed a lot, sometimes to the point of tears.

No one seemed compelled to talk for the sake of saying something. The conversation moved along on a broad range of topics from bawdy to adventuring to philosophical. To me, it seemed like each thought was offered up like an old sweater and each listener pulled a string that unraveled a story. We laid bare our beliefs, hopes and fears.

I was speaking with a wise Scottish friend recently and he described being part of a Bohm dialog in which participants were asked to not speak unless something vital needed to be said, each new response needed to connect to a previous remark. Silence predominated the dialog with my friend and his esteemed colleagues, yet there was no lack of insight and revelation, he was quick to add. In the Shenandoah and dark night, I experienced something approximating this. I began to wonder if more times there was a correspondence between the amount of words spoken and their import.

I was also reminded of a great Japanese artist who admitted painting an epic painting in ten minutes. When asked how this could be, he said, “painting was the easy part, it took me twenty years to conceptualize it!” Doing anything without conceit, design or objective can be the best way to create something entirely original and unique. Honest things come in due time.

It seems to me that we fill the air with too many words and sounds that more closely approximate noise devoid of meaning. Perhaps, we should say more by allowing the sound of wise silence to predominate?

The rain cleared away all vestiges of heat, smoke and flame. The fire burned itself out. Nothing was said.