Americans want to do stuff together; they want to build together.

I attended an extraordinary three days with national leaders from across the country. The Harwood 2017 Summit at Abraham Lincoln’s Cottage in Washington DC, facilitated and organized by Richard Harwood and staff at The Harwood Institute for Public Innovation brought 50 people together to in Rich’s words to “reflect, connect and rejuvenate”. Rich Harwood is perhaps our country’s best version of Socrates and is an exemplar in understanding the public voice by asking questions and listening deeply. President Lincoln spent many summer days and nights at the Cottage during the darkest time in American history and did just as what Rich asked each of us.

During the Civil War, America faced its greatest challenge as neighbors and family broke ranks with each other to decide the future of the nation and better define what America was going to be. Would the United States live up to its aspirations that declared “All men are created equal” or would we continue as a nation divided and in contradiction to its best ideals and endure the horror of human bondage?

The Cottage sits in a tranquil compound bounded by the country’s first military cemetery and the Old Soldiers Home and the Petworth neighborhood. The Cottage is a two story farm house colonial that has been restored. It was the District’s first home to be wired for electricity. Mary Todd Lincoln preferred the Cottage to the White House and even had the Lincolns personal furniture moved there. A century and half later, the grounds still emanate silence and reflection. Our group conversations were held in the room where the Emancipation Proclamation was written. I felt a sense of sacredness in the rooms and surrounding fields. 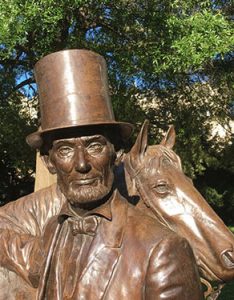 Rich asked us to consider what the word “dignity” meant and we had a robust conversation about what dignity meant in public life. An overarching theme that emerged from our conversation was the notion that dignity embraces a type of inclusion and affected how we speak and engage in public space. Rich also noted that Lincoln was both present and he never believed he alone had all the answers. If he were alive today, we would say that Lincoln was mindful and someone who engaged in integral and transformational leadership. Lincoln’s cabinet was made up with more enemies (frenemies, in 21st Century terms perhaps) than friends by design and the resulting conflict between honest adversaries led to a positive kind of tension. In these days of either/or and bifurcated thinking I wonder if a President could formulate such a cabinet that included a diverse set of perspectives.

During our small and large group conversations we explored:

Our closing session focused on Lincoln’s first inaugural address and we focused on the following excerpt:

“I am loath to close. We are not enemies, but friends. We must not be enemies. Though passion may have strained it must not break our bonds of affection. The mystic chords of memory, stretching from every battlefield and patriot grave to every living heart and heart stone all over this broad land, will yet swell the chorus of the Union, when again touched, as surely they will be, by the better angels our nature.”

We broke out in small three person groups and explored the following questions:

Notice that the questions focused on what I can do. We are too easy to say “they” or “them” need to do something to change. What is it that I need or can do was the focus of this session and most of the sessions at the Summit. We cannot change how others behave or think…but we may be able to better understand another person’s perspective. From a place of shared understanding we might not agree totally on all sides of an issue but maybe, we can discover enough common ground to move forward together.

At the end of the Summit we were all given what Rich calls a Personal Covenant to create that explored how each of us relates to work in public life. Some of the questions in the Covenant included:

A participant mentioned to me at the close of the Summit:

“I have been really struggling with the results of the election…I’ve been blaming Trump for a lot of things he doesn’t fully deserve, he’s a symptom not a cause for where our country is, I’ve been able to better see that over the last few days.”

I ask you…What can you do to find access points to people with very different perspectives? What unites us?

We are too quick to demonize others and find differences. What would happen if we shifted and discovered the things that unite us?

What unites us if is far more than what divides us, this I know.