What Would Walt Whitman Do? 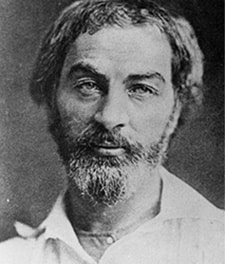 Camerado, I give you my hand!
I give you my love more precious than money,
I give you myself before preaching or law;
Will you give me yourself? Will you come travel with me?
Shall we stick by each other as long as we live?     Walt Whitman

American democracy is at a crisis point. Anyone reading this blog is well aware of the many things that divide Americans demographically, culturally- even our geography is fractured with both coasts voting mostly for one party while the Deep South and Midwest embraces the other. Congress is in gridlock and the acrimony and rhetoric nearly matching the dark days prior to the Civil War. Collectively, we do not abide well a neighbor or friend who has contrary views.

America’s greatest poet who sang the virtues of democracy and challenged each of us to evolve and transform ourselves and our nation would likely find the vitriol and anger familiar. Before Whitman became the “Poet” he was a newspaper man and editor in New York City, Long Island and in New Orleans. He wrote and editorialized on everything from the vagrants on Broadway to art and music to his concerns over public corruption and he had extensive experience with the national parties of his day. He was an early adapter in the “new journalism” movement and a passionate urban reformer.

His experiences in New Orleans likely provided his deepest experience with a multicultural America that included large numbers of Blacks (both free and slave), Native Americans, French, Spanish and likely everything in between. This was a far broader diversity than the mostly Irish and Western European inhabitants who made up New York and Long Island in his day. He never forgot the surreal experience of watching a slave sale and it ignited his empathy for slaves. This empathy no doubt fed into Whitman’s developing universal soul that deeply recognized we are all equal and democracy, at its best was a leveling instrument.

Whitman had a distinct poetry voice that was sometimes at odds with his real life persona. In the trance of poetry Whitman channeled the best of humanity and the promise of democracy. He was a staunch Union supporter yet he had complicated views on African Americans, he declared himself the poet of slaves and the poet of the master of slaves creating an egalitarian tension that infuriated some and inspired others. Empathy was a defining personal trait of Whitman’s and he made few distinctions between prostitutes, politicians, priests, diseased or the heroic; like his thoughts on democracy, people were ever evolving toward greater perfection. His universal vision had roots in the North and the South and every known or sensed place in the Kosmos.

Read as a whole, Whitman’s work was about people striving for a better future, being open to new ideas and who integrated both right and left brain thinking. His poetry was always about the emerging present and a more perfect future. He recognized in democracy a system that was adaptable and incorporated the insight that people to the core are interdependent, connected…and self-reliant all at the same time. His ideals correlate with what I call Master Capacity skills that Rick Smyre and I have included in our book Preparing For A World That Doesn’t Exist-Yet.

Unique among Whitman’s attributes in his era was his meditation practice that allowed him a transformational access to silence, stillness and his divine inner voice. His practice of sitting and observing allowed for a calming presence that left a lingering memory in nearly everyone he met from the thousands of soldiers he nursed in Washington DC’s squalid Civil War hospitals from both the North and the South to the men and woman who were attracted to him as friends and lovers. Being able to access deep silence created a person in whom patience and detachment allowed for wisdom and insight to emerge naturally. Patience is another key Master Capacity that leaders of all kinds need to develop in my estimation.

Whitman was a lover of humanity and found access points and connection with nearly everyone he met. His meditation projected a vision that incorporated all parts of the planet and universe to the tiny leaves of grass. He was a great listener and observed the subtleties comprised of the minutiae from facial expressions to the whiff of the lilac flower.

Whitman was not naïve to the evils of the world, yet he firmly believed that a vibrant, fair democracy that struggled with the tension between strong individualism and an ingrained belief in our interconnectedness was the best chance for humanity now in the future to thrive.

O days of the future I believe in you-I isolate myself for your sake,
O America because you build for mankind I build for you,
O well-beloved stone cutters (building a Republic), I lead them who plan with decision and science,
Lead the present with friendly hand toward the future.    Walt Whitman

So, what would Walt Whitman do were he alive today? All in all, I think, Whitman would believe in the goodness of the majority no matter where they placed themselves politically. He would believe in the perfection of himself as he believed in the perfection of every other thing that allowed for adaptation, he would practice patience and use his listening skills to understand multiple perspectives and embrace the present but not at the expense of the possible future. Most of all through his poetry that emanated from his meditation, Whitman would further connect us and show us how we are stronger together than divided and that democracy evolving is the most conservative and evolutionary natural thing in the universe. Lastly, he would probably ask us to reach out our hand to all who would grasp it, even a former enemy, and ask if “we will stick with each other as long as we live?”

Note: For further insight on Walt Whitman’s perspective on creating an integral self and how his meditation helped to catalyze his vision please see my article Walt Whitman’s Vision for a New Person and a New Democracy in the Journal of Integral Theory and Practice (December 2012). As well, please see www.waltwhitmanmeditation.com.